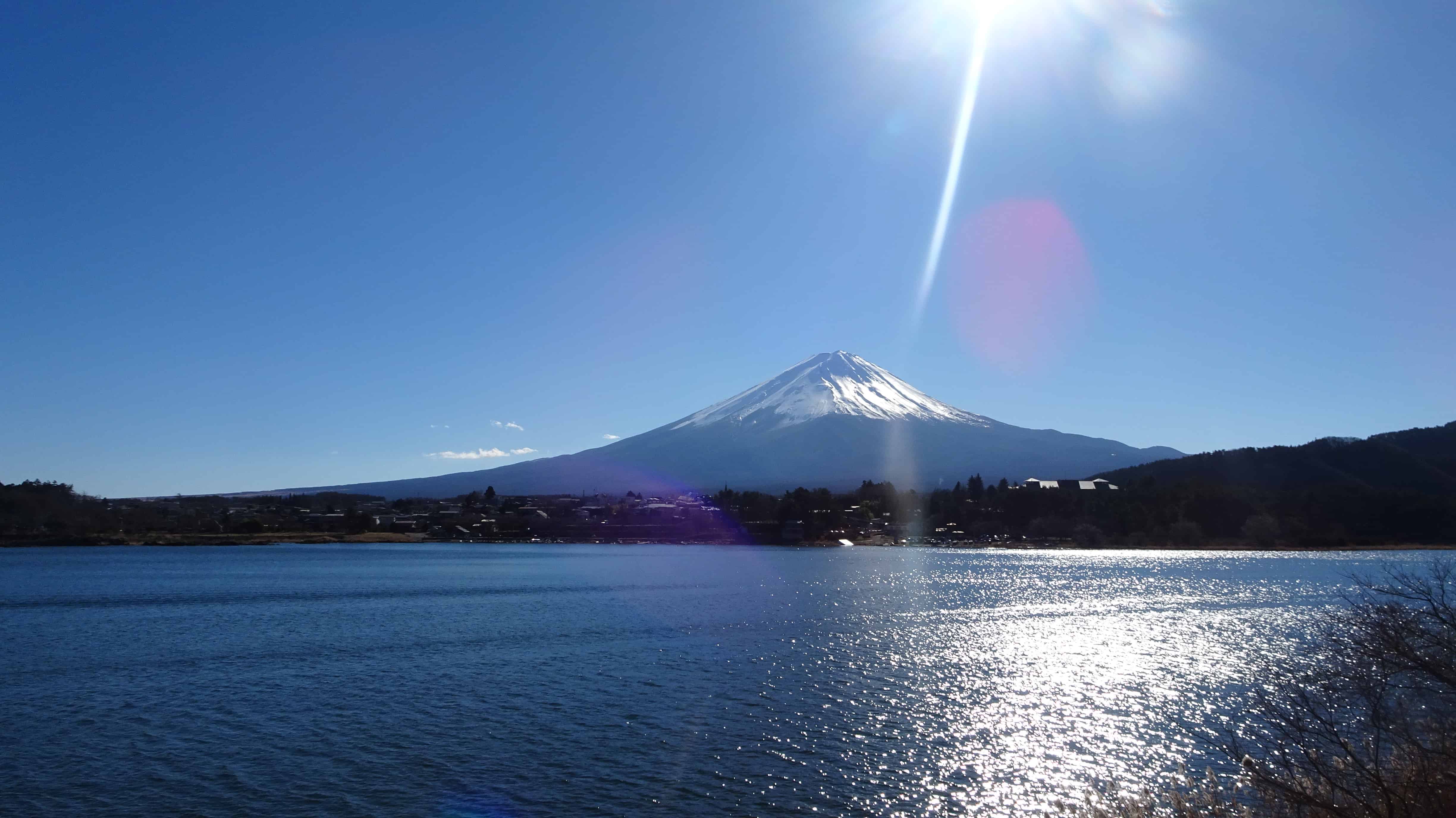 After less than three hours of sleep my alarm clock went off and I had to get ready for today’s day trip to Fujikawaguchiko. Known for its beautiful lakes and view on mt. Fuji. I felt unexpectedly bright and energetic after this short night. Yesterday had been a long day full of impressions of Tokyo and new-year celebrations in Japan After finishing our breakfast (Jangwon is an amazingly fast cook!) we headed to the metro station. Quite soon after leaving Jangwon told me that we had to rush a bit in order to make it in time for the bus. We walked super- fast and my shins started to burn immediately. What a non-relaxed way to start the day. We rushed into the metro system and actually missed the metro because it left one minute too early! That was a huge bummer as now we had even less time to transfer from the metro to the bus station. Jangwon made some calculations and came to the conclusion that we had to run the full 12 minute transfer to make it in time. Just thinking about running made me feel grumpy. If only we’d left the place earlier there would’ve been no problem at all! I tried to relax a bit in the subway before we had to run. Jangwon is a good runner, and is used to running every morning. It’s no problem for him to run all the way to the bus station. So basically reaching the bus in time or missing it was depending on my running ability. Just for the record, I’m the worst runner. Especially after only three hours of sleep! When we reached the metro station Jangwon flied to the exit and I struggled big time to keep even a little bit up with him. Then I decided to just run in my own paste as I could never ever keep up this fast paste. My body felt so tired and I really had to push myself to continue every step. My face was all red and my body very warm. I was swearing and felt like I was dying the whole run. This was the worst possible start of the day I could imagine. I was happy when we reached the bus terminal two minutes before departure but was too grumpy to act happy. I just dropped into my seat and removed several layers in order to cool down. Then I inflated my neck pillow and tried to get some sleep. After about two hours of half-sleeping we approached Fujikawaguchiko. The first view from the bus was a great view on the in snow covered Mt. Fuji! Perfect clear blue sky with the fantastic mountain in the background! That was promising! With still 10 minutes to go I closed my eyes again to relax a just a little bit more.
When we arrived the sky was cloudless and perfectly blue. And the sun was shining bright. This gave me the much needed energy to start the day for the second time.
We first got ourselves some information at the tourist information desk and then went off to rent bicycles for the day.

The plan was to cycle and hike around lake Kawaguchiko and lake Saiko before heading back to the bus station. We cycled to lake Kawaguchiko first and had our lunch overlooking the beautiful lake and mountains. It was nice to watch some people enjoying the day in swan-shaped boats on the water. The whole thing looked very serene. Even though the whole view was kind of mesmerizing, Mt. Fuji was nowhere to be found. I checked the map and saw only one place marked as ‘Fuji View point’ but that place was more than two hours away. We would probably not reach there today. I got worried I might not enjoy Mt. Fuji today. And even though Jangwon told me would see Mt. Fuji from the other side of the lake, I was not too sure about that. If it was, it would be on the map, right?! A closer study to the map showed me indeed some Mt. Fuji viewing spots around the lake. So let’s get going!

It took less than 15 minutes before I saw the majestic mountain for the first time during the cycling trip. It was perfect! So beautiful! I stopped immediately to take in this lovely view. With the sun shining on both the snow-covered mountain and the lake. And with the clear blue sky surrounding the mountain. This was exactly what I hoped for. I felt so lucky to be here today and to watch this view. This is what I’ve been looking forward to ever since I reached Japan. It’s fair to say that I was overwhelmed by its beauty. From this point on it only got better; we passed more and more viewing points with better and better views. I felt like the happiest person alive and just had the best day enjoying the scenery, making pictures and riding the bicycle. The bikes were so comfortable and the roads were good, so it didn’t take too much effort to cycle around the lake. Every time when I looked at the left I felt happy with the good sights!

After having stopped for a few times to make pictures, we came across a more crowded place where people enjoyed great view and Japanese ice-cream. I’d seen the ice-cream before but never felt the need to taste it until today. I decided to go for the most Japanese option; Macha and milk flavour. Macha is the name for green-tea. Something Japanese love! There was only one size available and I was surprised to see that it was huge! One of the largest ice creams I ever had! Of course I had to take a picture of the ice-cream, me and Mt. Fuji in the background!

Since we really took our time to soak up the lovely view and environment we moved quite slow. Jangwon was a bit worried we might not be able to reach the second lake and return back to the bus terminal in time. As we both didn’t felt like rushing I opted to just see how far we can get while taking things easy. As for me, the day was already so good! I already felt like the happiest person alive. So whatever is going to happen; I’m alright with it. We continued our cycling trip and before we knew it reached the end of the first lake. We continued to the second lake, lake Saiko and again enjoyed one of the best views Japan has to offer. We were the only people there. That felt very special. We had this perfect place all to ourselves! We took the time to sit down and relax a bit while enjoying some more food. Jangwon prepared a delicious lunch for us this morning. We brought plenty of food to feed ourselves the whole day :D!

Looking at the time we now had to make a plan. I opted to just cycle for another 30 minutes before heading back. Determined to get at far as possible we cycled in 5th gear to get to the next amazing viewing point. It just looks like we’re walking inside a perfect post-card. What an amazing day! And because we were cycling so fast, we could easily finish our ride around this lake too! The cycling itself was so much fun! Going down the hills we went super-fast and the bicycles rode so smooth. It didn’t took that much effort to move from place to place. Making it very enjoyable! And with many people spending new-year’s day indoor, we had most of the road to ourselves around the second lake. Very nice!

When we rode back we chose to not go around the first lake, but instead to go back the same way we came from. By this way we could both enjoy the sun and the views on Mt. Fuji longer. A little earlier than expected we arrived back at the bus station and the bike rent shop. But this was good! I was completely satisfied :D! It’s interesting to see how a ‘worst start of the year’ can change to ‘the best start of the year’ in just a few hours. Best start of the new-year ever! Hopefully you had a great start too :D!

A Train Journey On Top Of The World -8/6 minutes read- A travel story about the mesmerizing train journey from...

After the warmest night I ever experienced (in a Mongolian Yurt of all places!) we got op quite early to continue...