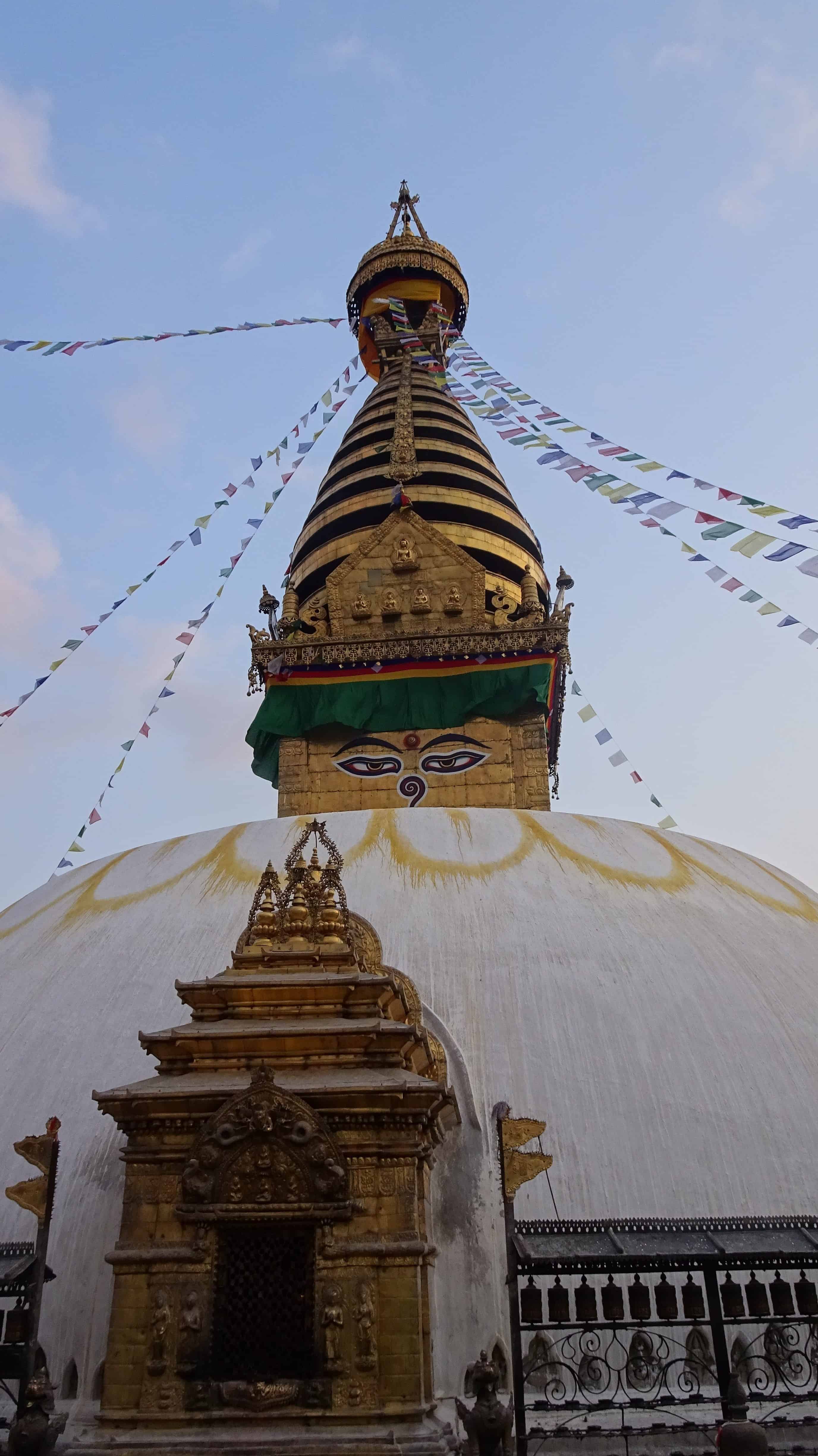 Wow! After a long and comfortable night I wake up in Kathmandu and catch up with my stories. After finishing yesterday’s story I go upstairs to see if Christina is still here. And she is. I took a short but refreshing shower, got some small laundry done and went upstairs for some breakfast and more writings. I chose a perfect little place in the sun. The weather is good and so is life! I enjoy the sun as I wait for my breakfast and chat with the girl who works here. We all sit on the floor on little mats and pillows. I really enjoy living like this! Then the breakfast is served. It’s a fantastic place filled with an omelette, pancake with honey and hash brown potatoes. Accompanied with a cup of lemon tea. Perfect way to start the day.

Christine joins me and we are talking about how much we appreciate life at the moment and how much we enjoy being here. This is really a good place to enjoy life to the fullest. With inspiring texts on the walls, friendly and open minded people everywhere, music, fantastic food and drinks. Almost like a real life festival. Everybody here enjoys life to the fullest and chose a travelers way of life. Everybody here is going to challenge their selves with a two week hike or more. We are all together in this vibe. And it’s perfect. Right now, the sun is out. I’m sitting with a shirt on my head and a small pot of fresh lemon tea next to me. Writing stories in the sun. Life is amazing and absolutely good!

I spend most of the afternoon writing and chilling until at 03:30 pm Denzil is finished his job. Denzil is Nepalese and started working in the hostel three days ago. He likes to meet foreigners and to practice his English. He invited Christine and me to go outside for some city sightseeing. Sure thing! For the first time we actually leave the safe and relaxed hostel and get out in the city center. As soon as we walk around the corner I see the chaotic traffic, the Nepalese people and the many small shops. There’s a lot of dust in the air which makes it a bit uncomfortable to breath. The sound of honking is everywhere and won’t stop until we’re back at the hostel. Denzil wants to show us the Monkey temple and knows a short cut to get there and a backdoor to get in. We walk down the streets and get many impressions! Rickshaw’s on the street, drivers asking us to take his ride, silver stores, art stores, prayer flags, local markets, shawls, masks, colors, colored houses, people, stupa’s, monks, traffic, dust, garbage etc. It’s a lot to take in and I’m happy that Denzil is accompanying us. It gives Christine and me the space to just follow while taking in all the impressions and take pictures.

We walk all the way to Denzil’s neighbourhood where he drops his bicycle. While he walks to his house Christine and I are waiting next to a busy road. We share our impressions and feel quite overwhelmed by this new world that we are in. We get lots of attention in the way that men are looking at us. Some of them talk to us, but most of them are just watching us. It’s a completely different world from everything I’ve seen so far and I’m thinking this is what India might look like. But then the smaller version. It’s good to be in Nepal first as this is already a lot to take in. India is surely going to be a lot more to take in, so at least I’ve had a small taste of it now. Still I feel quite the culture shock as this place differs from all the places I’ve seen so far! I wanted a different world; well, here it is! I’m happy to be here but it’s really a lot to take in. Basically everything looks different from what I’m used to. And the dusty air pollution is a big struggle a it makes it difficult for me to breath! It’s a smart idea to buy one of those masks for this place.  For now, as a temporary solution I use my scarf to cover my mouth with.
When Denzil is back we continue to the Buddha park, home to three big golden Buddha’s and a couple of prayer wheels. It’s nice to walk around here. Lots of locals are taking pictures in front of the Buddha and of course so do we.

I sit down for a second to take a picture and start a conversation with an older man. We are taking about my trip and he introduces me to his granddaughter. We had a short conversation about who’s accompanying me and I told him that today that’s Denzil and Christine, and currently him too! It was a fun conversation and I think the man appreciated me mentioning him as my company. We didn’t talk long though, as my other company wanted to move ahead. We walked around the big Buddha’s before we continued our way to the Monkey temple. We walked many streets, passing many market stalls along the way. A variety of products was being sold including jewelry and colored powder. People were burning trash close to the path, which made it really hard for me to climb the stairs. The dust pollution and the smoke was just a bit much for me to take. I covered my mouth again and kept walking, but I could feel my lungs protesting and even my stomach started to feel uncomfortable. By the time we were at the top we were welcomed by many prayer flags and an amazing view on the city!

Kathmandu is a lot larger than I thought it was. Very interesting to see. The colored flags look super cool and make me excited to see the temple. We walked a few more stairs before we reached the temple. I saw a group of children practicing Kung-Fu and then reached the temple side. More prayer flags, better sights on the city, golden prayer wheels and monkeys awaited us. It’s a quiet place compared to the chaos of the city. Which made it extra nice to walk around. We passed a white stupa, some nice wall sculptures and followed many more prayer flags to bigger and smaller stupa’s. I’ve never been to a place before that has so many prayer flags around. It looked very nice and cheerful. I enjoyed walking around the big stupa and taking pictures of the prayer wheels, the best views on the city so far and the monks visiting the place.

Because it was getting dark we decided to walk back to the hostel. We said goodbye to Denzil and navigated our way back to the hostel. It was an exciting walk as we were not sure how safe we could feel. Denzil told us we would be okay for now, but might be a bit dangerous after 8pm. After spending so much time in China, South Korea and Japan it’s super weird to be in a place that can be unsafe after 8pm! We felt semi uncomfortable walking the crowded and dark roads. It became even less comfortable when we went off the main road and walked down the sandy, dark, dirt roads. I felt confident enough to keep walking but was happy to be here with someone. Not much later we walked into busy streets again and saw loads of people and foreigners. This felt like a safe place again! Since we were on the hungry side we bought some snacks in a huge snack market before we returned to the hostel. Now it was time to sit down a second and digest all the things we’ve seen. What a completely different culture! It was fun to share our experiences with others. Everybody who hasn’t been to India before considers Nepal to be quite the culture shock. But people who’ve been to India before consider Nepal to be quite the relaxed place. It’s interesting to see how different experiences contribute to different perceptions.

Since we still haven’t had proper food, Christine and I went out for a good dinner at the Western Tandori and Naan. A super small restaurant packed with foreigners. We had to wait quite some time to take a seat but it was worth waiting for! I had a fantastic vegetable curry with garlic naan and rice. It was funny as the curry didn’t came with rice. When I asked for rice people looked rather weird at me. As if I ordered a strange combination of food. For me it was a good choice though as the curry was a lot spicier than I thought. The rice was a good way to cool the food down a little. The rice itself had a soft taste too. This is different from the plain rice that’s being served in China.
All in all today has been a super surprising day full of impressions! I’m happy to be in this completely different world, but am also happy to be back in the hostel again and to take it slow a bit. Still, I’m excited about seeing a lot more of this country and to see the differences between the big city and countryside. I still need to make my plans for Nepal but I’m not in a hurry. But I am pretty excited! It’s great so far and going to be even greater. For sure this is going to be a completely new experience. And I’m ready for it !

Harandeh & Burnik Cave; Plan Your Trip heaven. Everything you need to know to plan your trip to the heavenly...

7 minute read- A story about spectacular nature, beautiful people and the valuable life lessons learned in the...