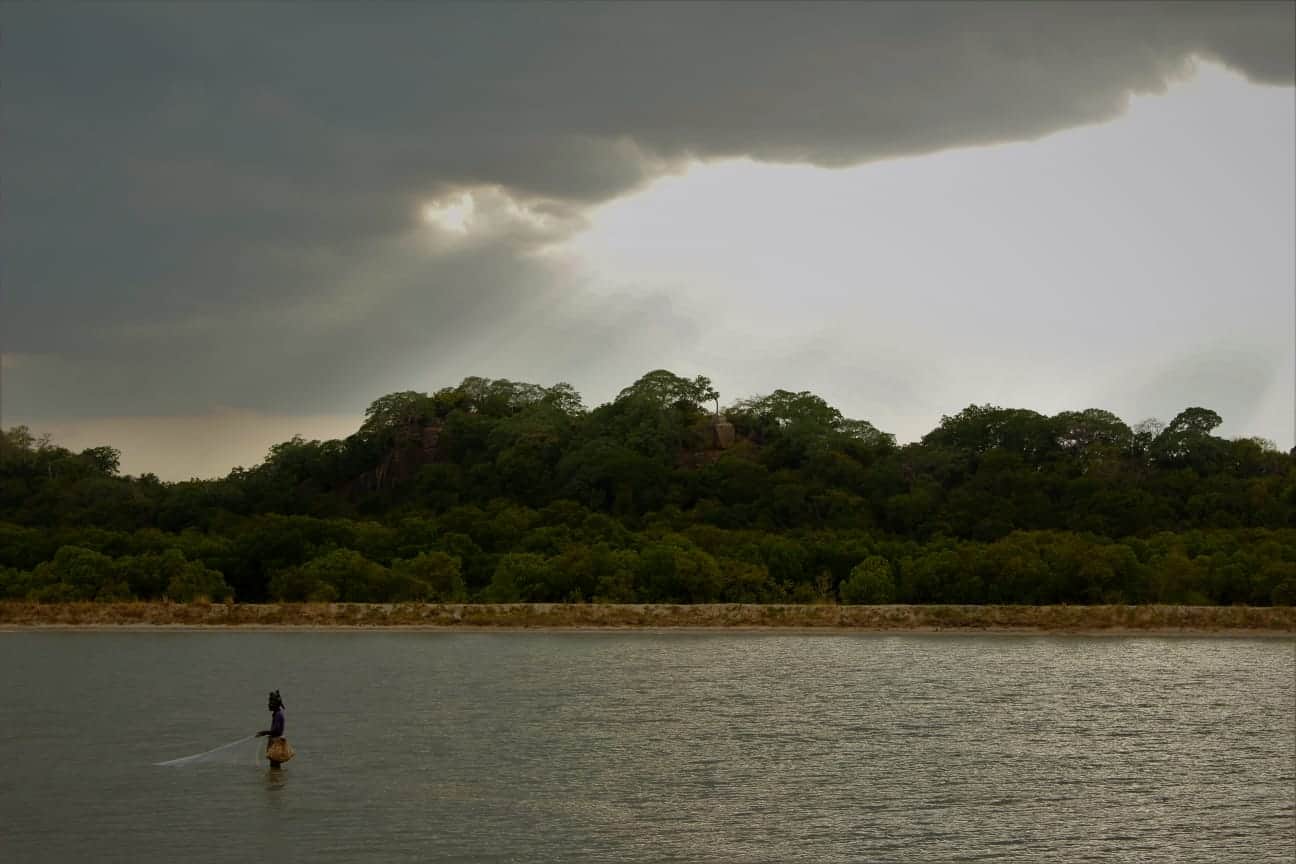 7 minute read- A story about spectacular nature, beautiful people and the valuable life lessons learned in the remote area of Trincomalee, Sri Lanka.

The morning is cool, the ocean is still. It’s barely 05:30 when we walk towards the soft sand, but the beach isn’t empty. An army officer greets us from his booth with a tired morning smile, but the stray dogs are less welcoming as we approach their territory. With loud barking they disrupt the peaceful environment and try to chase us away. As we pass them and head for a quieter place, the peace resettles within minutes.

In the far distance we see tourist and boatmen getting ready to go whale and dolphin watching, a popular activity from April to August. The grand mammals are best to be seen in the early morning, when the sea is at its calmest.

And calm she is. Her light blue water stretches as far as the eyes can see, barely without any waves but a gentle crawl to the shore. Her sound relaxing as she smoothly laps the islands white sand. The morning air smells fresh and the cool air feels delightful on my red-burned skin. It feels kind in a way, soothing. As if I’m welcomed by the ease and softness of a new day.

The sun hasn’t risen, yet dawn adds the first soft tones to the sky; light grey, blue, purple. The colors intensify as the sun approaches and brings red-orange colors to the sky. It doesn’t take more than a few seconds before her first sight hits the horizon. Her color mellow, deep orange, as if she herself still has to wake up. She then disappears behind a long stretch of mist. Yet the colors keep changing; purple turns blue, and orange becomes yellow. And then, with spectacular power she appears again and stretches her bright light into the sky. An official start of a new day.

To beach, or not to beach

Temperatures rise quickly here and it’s promising to be hot. Humidity makes it exhausting to roam around on foot. Luckily Trincomalee has lots in store, with relaxing on the beach the most tempting.

That’s exactly what we had yesterday; a long, relaxed day on the tropical beach of Niaveli. The most remote of the designated beaches in this area. Swimming in the warm, deep blue water of the Indian Ocean, sweating in a heath that becomes almost unbearable at midday and drinking fresh fruit juice in the shadow of a palm tree. Playing with the marvelous white sand, gazing at the blue-white coastline that stretches as far as the eyes can see and observing local life as people gather to sea-bathe in the late afternoon.

Locals are smart, avoiding the heath of the day and I wished I followed their example. Instead, I now look like every fresh-landed-beach-tourist and have a painful, red-colored skin beyond imagination. It is exactly the reason why another beach day doesn’t sound appealing to me; a full day exposed in the sun simply sounds unbearable.

Instead we decide to roam around the northern part of the island in another, more adventurous way.

The hotel manager introduces us to Rafik, a tall, dark skinned man dressed in a long, white tunic that is often observed in Muslim cultures. A perfectly white matching Taqiyah, -round shaped traditional head wear- contrasts with his face. His body looks static but his eyes are warm ‘You want to rent a scooter’ he asks Amir directly. ‘Yes, but I didn’t bring my driver’s license, is that okay?’

Rafik looks at the manager for a moment, his face looks serious. ‘Where are you going?’ he replies firm, but we’ve made no plans ‘If you go north you can rent the scooter’ he adds, ‘There won’t be any police there’ We’re going North. The men shake hands while I prepare our day pack and cover my burned skin; let the adventures begin.

There’s only road here, and it’s a paved one. We follow it up in search for some aw-inspiring beaches, but soon get caught up by the nature around us. Jungle-like trees have deep green canopies, and fresh, young leaves color the low shrubs and bush that overgrow grey-black weather worn rocks in the distance. Curious to get closer we follow a dirt-road that eventually leads us to some shallow waters.

The surface looks beautiful; somewhere between a man-made lake and a mangrove forest. Clumps of dry root are sticking out of the water at its horizon and white, overcast clouds are reflected. Turbid sometimes as a pleasing wind gently strikes its surface.

White birds with long necks move around to catch their meal of the day and also a middle aged fisherman is working. His legs knee-deep in the water, unassumingly bare-feet. The edge of his shorts wet from absorption. A piece of cloth is wrapped around his head to protect himself from the direct sun that often breaks through the clouds. And another piece of cloth, holding his caught fish, hangs loosely around his waist. He moves around slowly, as if he doesn’t want the fish to know his presence, and waits patiently after he  throws out his white net in an attempt to make his next catch. It looks peaceful, meditative and exhausting at the same time. He smiles at us for a split second before continuing, focused on his job.

A kind and warm neighborhood

We continue our way but not straight back to the paved road. Instead we follow the dirt-road up to the edge of a colorful neighborhood. A young girl, dressed in a multi-color tulle dress with soft pink, white, blue and purple walks with a white ball beneath her arms. Her hair beautifully braided. She seems to be the only person around and stares at us with an expression of wariness and surprise. Her look tells me there aren’t a lot of foreigners here.

As I kindly greet her, a woman in a bright red dress with a cheerful flower pattern appears in the garden of the house on the right corner. Her hair similarly beautiful to that of the child. Her face broad smiling and her eyes look curious. She stands in front of her home, which on itself -with its blue painted walls, red roof tiles and a garden full of green- looks remarkably sunny. She waves happily as we pass by and I immediately feel welcome.
Just next door another lady, wearing a pink dress that matches the color of her house stops us and wide-smilingly asks us ‘Where are you from?’ Also other ladies and children come out to greet us. ‘We’re from the Netherlands and Iran! Your country is so beautiful!’ at this point I can only smile.

The few homes that shape the neighborhood are beautiful and have such a positive vibe; with colorful houses in bright orange, blue and pink. Palm trees with young, green coconuts and banana trees in the gardens, along with plants in colorful pots. Fences made of wood and silver corrugated iron, as well as decorating dried palm leaves add to the welcoming charm. Excited shouts of boys playing volleyball on a nearby field and the presence of genuine ladies in colorful dresses, with a genuine interest and a genuine smile give this neighborhood a warm and welcoming presence I’ve seldom seen before.

Filled with energy we wave goodbye as we head back to the main road, and gaze when bits of coast appear at just a stone-throw away. Revealing even more of the beauty around us. The scenery is dramatic as the sun pushes through the clouds, illuminating the open water.

For the second time today we see how important fishery is to the local community. Adjoining the Indian Ocean, colorful boats, white-blue flags flying in the breeze, woven homes, one single palm tree and large fishing nets characterize just one of the coastal villages where fishermen work from.

One village ahead, along the main-road, Muslim belief is prevalent. Ladies wear long garments and colorful head-wear. There’s a small Islamic primary school down the road. Amir, curious to learn about their methods asks a teacher if we can visit the school. Welcomed with curiosity and kindness he opens the door. ‘Where are you from’ the teacher asks. ‘Iran and The Netherlands’ Amir replies. ‘Ah, so you’re a Muslim?’ his smile broadens. To prevent confusion Amir answers ‘Yes’

The school has a great ambiance; boys and girls have classes together, in the open air, under a corrugated roof. Seated in rows of five they study behind long wooden tables. Distance rather than walls separates the classes from each other. And a mix of fun and excitement is present. Boys are laughing and waving, while the girls are generally shyer, yet still excited. Some with generous smiles and laughter on their face, others hide their smiles behind their hijabs. I feel out of place, in my short summer dress, but no-one rejects me because of it.

‘What are you studying?’ I ask one class. But besides a lot of giggling there is no answer. ‘What is your name?’ I try again, more specifically this time. Big eyes stare at me, some joyfully amused, some perplex about the situation, but nobody responds. When the conversation is just getting stated it’s already time to go. Caught up in excitement I blatantly shake the teachers’ hand, under loud cries from the class. My face turns red from this cultural mistake.

With cheeks still glowing I hop on the scooter. My mind shifts between different thoughts; ‘After having spent six months in an Islamic country I should’ve known better then to show up uncovered, shaking a male teachers hand in front of his class’ and ‘At least over here I’m not rejected for having a different cultural background’ Besides the initial shame, it’s liberating to experience that when cultural differences are recognized and accepted, people can respond from a base of understanding and humanity. And isn’t that just what the world needs, humanity?

Has traveling brought you important experiences or lessons about life? I’d love to hear them though the comment section below.

Negombo or Colombo, Where to go? Plan the perfect start of your journey

Six Amazing Things To Do In Trincomalee

A Train Journey On Top Of The World -8/6 minutes read- A travel story about the mesmerizing train journey from...

Dear visitor, Welcome to Discover World Places! A place where I will be blogging about my adventures discovering...